Before my family left for the last leg of the trip we got to tour around Changzhou a bit. I wasn’t feeling well for this part so I’m piecing together what we did based on the photos. I still managed to do quite a lot! Might be a good time to mention, China has awesome bathroom availability. Much better than Europe in my experience. I went ‘backpacking’ around 11 countries in Europe about 4 years ago and there was more than one occasion where we couldn’t find a bathroom. Restaurants didn’t seem as open to letting us use theirs. In China, every hotel, restaurant and shop pretty much has one and they’re very open to letting anyone use it. Not only that but there are public toilets at all tourist locations and most city blocks. Only thing is you have to remember to bring your own tissues (and hope the toilet isn’t backed up..).

We visited Hong’s Great Aunt who used to live in the countryside on a farm. Although she hasn’t moved, she is now pretty much in the suburbs of the city with only a tiny bit of land left. They are actually hoping to be bought out by the government for their land, so that they can move into more modern houses in the city. His Great Aunt is 89 years old and only recently stopped helping around the farm. Her late husband had been farming well into his 80s and passed away not long ago. Here she is with her brother, Hong’s grandfather who is 79 and full of spunk.

Her daughter (and husband) lives with her along with her granddaughters. They still raise ducks and have a fairly large plot of different vegetables (middle pic). We left there with a huge bag of fresh broad beans that smelled so good.

Just for fun, we went to check out the local amusement park which was like Disney World but with dinosaurs. What a great place it would be to take kids to. I visited Changzhou back in 2007 and had no idea this place even existed. We took some fun pics but didn’t stay long before heading out for Hong’s cousin Yao’s birthday lunch.

Yes they have birthday cake in China although it’s not nearly as sweet and gross as the stuff here. We sang happy birthday in the same tune too. That’s Yao with her grandparents on the right.

We also went for foot massages. I didn’t get one because I’m so ticklish I would have kicked them in the face if they touched the soles of my feet. The foot massages actually turned into full body massages for the ladies.

We did quite a bit of shopping in his hometown as well. Tao seems to know everyone so we got to visit some clothing factories where he knows the owners. Hong got measured for a custom suit and picked out the style and fabric he wanted. For about $300 CAD per suit he got them custom tailored! He has a hard time finding suits that fit his frame. Not really a bad thing, having too muscular shoulders and a small waist. We all got something free or cheap from these factories. They end up having piles of clothes that somehow don’t make it to stores or to second hand shops. Since they have agreements with the clothing companies they can’t sell them out of the factory. So they try to give them away. And I’m talking brand names not cheapy Walmart stuff. I got a nice free trench coat, some shirts and jeans. There’s no mirrors in some of these places so we take pictures of each other to see what it looks like.

My favorite shopping in China is actually at the local stores though. I have a hard time finding stuff to fit in Canada because even the S or XS are sometimes too big. In China, I’m guaranteed to fit into an S or M in every single store. Last time I went I got a Chinese traditional dress custom made, but wasn’t there long enough to have them try it on me and tailor it. Turns out the dress didn’t quite fit in the end. This time I went to the same shop and tried one off the rack. It fit! My mom got a tradition silk top made from the same place which fit her perfectly too.

Oh and everyone did a lot of eating. I stuck to some chicken soup and mostly home cooked soups. Here is an example of lunch: 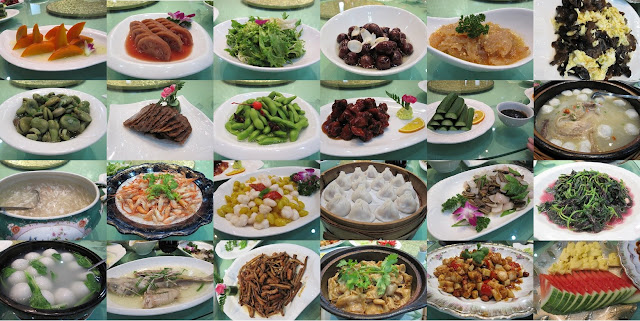 There’s a really nice park in his home city too.