I was feeling invincible. The SCDiet has a way of doing that. You start to feel wonderful and then you start to experiment. I believe that because the amount of healing SCDiet brings, when you start to experiment, you actually do ok. Your body handles it alright for a little while. Your digestive system stays unusually quiet, your mind clear and ignorant. You see, I’ve had quite a leap in healing over the past 6 months, maybe even more than the previous 2 years. I credit this to eating tons of nutrient dense food (liver, pastured eggs, pastured butter, oysters) and getting off the birth control pill. I’ve had months of no rashes, no stomach upsets at all, not worrying about gluten cross-contamination even. I thought maybe I never had Celiac, maybe the rash was a coincidence.Â That’s what I thought while I was in China.Â My body was doing just fine with tiny amounts of wheat in marinades, sauces, and cross-contamination. I didn’t have any stomach pain or rashes, although I did notice a bit of strange gurgling noises. It was probably just my system working a little overtime to deal with all the nasties I was eating. I felt fine. I felt great. I even felt a strange high. I kept telling my family and in-laws how great I felt, and everyone agreed I was doing well.

Our second day in Xian we were combining lunch and dinner because of an evening train ride to Hong’s hometown, Changzhou. We decided to eat at a famous dumpling place to sample the last of the 4 local dishes. Since we were there in between lunch and dinner time they didn’t have as much selection as they normally do. My selection for SCD-legal fare was quite limited but doable. I got a plate of shrimp with cucumbers, a plate of greens and some broad beans (not even sure if those are legal). I was starving. I ate every shrimp but knew that was not nearly enough food to last me a 14 hour train ride. I filled up on some veggies but those don’t provide much energy either. Rather than order more shrimp, I decided to try the dumplings. I had this great plan to bite them once, then eat the middle, so I was only getting a mouthful of wheat per dumpling. Somehow at the time this seemed like a great idea. I had no pressure from anyone to eat these. I had enough cheese and Larabars with me to last the train ride. I just felt invincible.

I ate two dumplings. Then more plates of dumplings came through to our table. Hong actually dropped one plate and they spilled onto the table top. I avoided those dumplings, thinking I’d better be safe and not get food poisoning from something that fell on a dirty table top. I ate two more ‘safe’ dumplings. They were pretty good, but honestly I thought as I was eating them that I really didn’t miss not eating food like this. I would have traded them for bacon or SCD yogurt any day.

The pain started within about 45 minutes. It was upper GI pain, just above the belly button, deep inside. Last time I had pain like that was when I was eating wheat constantly (and sick constantly), so this time all I was thinking was that I would be sick right away. But the sickness didn’t hit. The stomach pain continued. We went to the City Wall in Xian before heading to the train station. I didn’t even realize I was bloated until I reviewed my pictures. Here I am 1 hour after the dumplings. It got worse later.

The massive headache started on the train. I took Gravol to try and sleep. I woke up every hour anyway. A strange old symptom I had forgotten about came back; I had to pee a lot and felt awful trying to hold it. By this time I was just hoping for the sickness to hit knowing it would relieve me of the pain. I didn’t care if I was sick on a train, I just wanted it to be over with. The train ride was 14 hours. I slept fitfully for most of it. I ate one little package of cheese, a banana and drank water in that time, I just couldn’t bring myself to eat anything else. No sickness yet. The Rash was starting to appear.

We arrived in Hong’s hometown and I was so relieved. Finally access to home cooked food. I was still not sick yet and still in pain. Hong’s aunt made us breakfast with congee, eggs and pickled veggies. I knew the congee and eggs would be a bad idea but was starving so I ate it. I would later find out I didn’t digest any of that.. (tmi? sorry haha) Rash started getting itchier and spread across my entire chest.

Here’s where things get a little fuzzy. I know we all got a chance to shower after the late breakfast. I know we went for lunch, and dinner, and I think I had a nap in between? I think I went to bed early while others looked at pictures? We took family pictures at some point too (proof below). Hong’s aunt did laundry and I remember bringing her a bag of my clothes. I remember complaining the mattress was too hard and getting a blanket to fold up and sleep on. Or was that the next night? When did the sickness hit? I think it was that night, about 24 hours since the dumplings. Why is my memory of this so fuzzy? I can remember every detail of the first week, and the last few days, but not the sickness in between. I could ask my family, but I think I’ll leave this as a reminder. <-This is your brain on gluten.

The next morning the pain was all gone and I was left with some pretty intense stomach upset. I ate congee and fresh eggs for breakfast. I tried to drink enough water as we toured around the city that day. We visited Hong’s great aunt and then went to Dinosaur Land. By then I was just looking for a bathroom. I wanted to go back to the house but decided to go to lunch anyway. I ordered chicken soup but it’s obvious they had put something in it since it didn’t taste like homemade. I didn’t really care as I was so dehydrated and weak from being sick. I drank/ate 5 small bowls of it. I was sick at the restaurant too and decided that going home for the afternoon was best. I went straight to bed.

I missed dinner that night and was home alone. I almost passed out from dehydration/weakness but managed to crawl downstairs and get a banana and some water. I felt better enough to sit up at the computer but had trouble getting to sites and downloading files (so much of the Internet is blocked in China, and trying to open attachments/documents on Chinese Windows proved impossible). I turned to the BTVC-SCD and GAPShelp Yahoo groups and got some great advice including the electrolyte drink recipe. *HUGE* thank you to everyone on the boards, I tried to reply to all and hope I didn’t miss any! A bunch of people also mentioned activated charcoal and said you could make it usually by burning some kind of starch. I would try this once well enough. Turns out I missed the nicest dinner of the trip at a restaurant in a park. A local news team was there and wanted Hong’s family to be on TV. The park was beautiful and they all took wonderful pictures. They came home and told me this. I broke down sobbing. I knew I was going to miss the last leg of the trip, 4 days touring around the most beautiful cities and a mountain. I did get a chance to visit most of these places on my last trip to China, so I wasn’t too upset about it. The down feeling just seems to always accompany the stomach upset.

Hong’s mother stayed with me at his aunt’s house since she had to work during the day. The last half day or so of sickness Min took me to a Chinese Traditional doctor. I was very excited and hoping Chinese doctors were more helpful than Western doctors. At the very least it was an interesting experience. Let’s just say Chinese hospitals are a scene of organized chaos. I’ve never had an appointment with a doctor with about 20 other people in the room! They were talking all excitedly and I hoped that meant they knew exactly what to do. Turns out, both the nurse and doctor had never heard of Celiac disease, couldn’t even begin to comprehend why I would not be able to eat wheat, and spent most of the time asking Min about it. Well, the doctor was somewhat helpful in that he prescribed a bunch of herbs and charcoal mix that you make into a tea. I only tried one dose though and it made me feel funny. The doctor also said to only eat homemade food (hurrah!) so I used that as an excuse the rest of the trip to not eat anything in restaurants. I made banana pancakes (eggs and banana) and burnt some bits on purpose. The burnt pieces did taste like charcoal so hopefully I did it right. It seemed to work quite well, either that or by then my system was done with the gluten attack. I made chicken soup and ox tail soup and homemade SCD yogurt for the rest of the week. SCD intro in China, it can be done! It had been 3 days of pain then sickness, but once over I was recovering quickly. 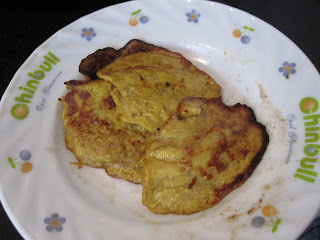 Finally I was feeling better and I even got to experience daily life in China. I went to supermarkets, fresh markets, clothes shopping, visited Hong’s grandparents and got to nap like 4 hours a day. It was wonderful! I’ll cover all that with pics in another post, it was really fun. Unfortunately the rash I got was really bad and stuck around for a good 6 days, but at least my stomach, head and energy were doing well. I’m not happy I got sick on my trip, but it happened, could have been worse, and definitely taught me some very valuable lessons.

I do have Celiac disease. And Dermatitis Herpetiformis.Â I am not invincible. I will never eat gluten again. I will do my best to prevent cross-contamination in my daily life, just in case. I will stay grain-free (no the congee didn’t help!) and as close to SCD as I have to. I will experiment only with food that might contribute to good health – raw milk, sweet potatoes, chocolate (mental health counts, right?). SCD heals me, that I am sure. SCD intro helped me recover from the glutening faster than I have ever recovered from a severe digestive upset. And next time I go to China – there will be a next time 🙂 – I will not eat the dumplings.

Stay tuned for some fun pictures of my time living SCD in Hong’s hometown.