Before leaving Changzhou we made a special trip to my favorite place in China. It’s a lake not too far from Hong’s hometown called Tianmu Lake that have a certain type of fish from which the local restaurants make fish head soup. The fish are enormous and you get quite a lot of good tasting meat in one soup. That’s not a whole fish in that pot, just the head. My favorite part of the fish head is the cheek. The meat from the cheek is tender, flavorful and has no bones. Somehow I didn’t end up getting the cheek, so my goal is to learn how to ask for it properly in Chinese before we go back again. My favorite dish! 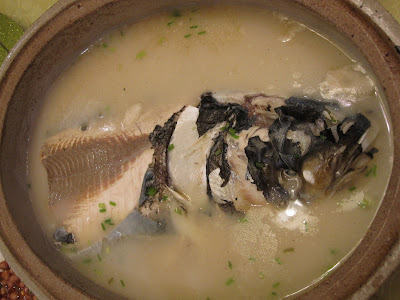 The lake was just gorgeous as well. It was a misty day but you can just see the outline of a fisherman in the photo on the left. There was a group of women dong some ‘evening exercise’ dancing in front of the lake. It was such a gorgeous setting.

They served us a whole lot of other dishes as well. I stuck to eating only the fish head soup and didn’t have too much broth in case they put something in it. I was feeling good but just being careful about what I was eating. Notice how most of the food in this picture is green or meat. That’s how it should be!

We traveled back to Beijing by another short flight. Tao again has got the connections. They let him and Hong’s parents through security with us even though they weren’t getting on any plane. And we got to wait in a private VIP lounge with tea and drinks. How fun is that?

Beijing
Our last 2 days in Beijing were all about shopping. We had Tao’s good friend Wong Li take us around the first day with her son, Cliff, who was just a bit younger than me. We went shopping at the Yashow market which I had been to before and had so much fun at. Anything in there can be bargained and for foreigners they price starts ridiculously high. The funniest was when my mom bought a traditional jacket. They started her at something like 400 RMB. Hong stepped in and bargained her down to 100RMB. She told us our “Chinese” friend was a good bargainer, he is! She bought the jacket and we left that stall to go look around. I then decided that I wanted a jacket so we went back, this time without Hong. I tried one on and it fit well so I asked how much. She quotes me 180 RMB! We just laughed and started walking away, at which point she laughed too and agreed to 100. I can’t believe she tried to get me to pay more. She was still happy to make 2 sales even though we bargained her quite low. Unfortunately we don’t have any pictures as they don’t really like us taking pictures inside, and we were too busy shopping anyway.

After a quick lunch… 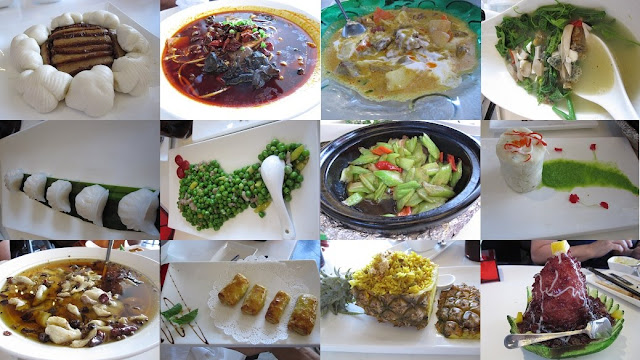 While the pineapple rice was pretty cool, the most interesting to me was the oily peppery fish soup on the bottom left. It was served with a slice of bread. You take a piece of fish and dab it on the bread to soak up the oil. At the end, the bread was usually discarded although you could eat it if you want. I just thought it was neat, the one dinner we had bread, and it was used like a napkin. I didn’t eat any of this dish obviously..

We continued shopping along a new pedestrian street. There’s a little train that runs along the street although it’s not very long. It was built a few years ago for the Olympics and has a lot of designer shops and of course a KFC. My mom stocked up on some good jasmine tea (her favorite!). We got more food on a stick, this time candied crab apples.

We randomly wandered into a hat shop where I somehow found 2 hats that actually fit me. My mom also bought a hat, and then Hong felt left out so he bought a hat too. After a nice picture all together, we went to Wong Li’s house for a home cooked meal. It was a nice, relaxing last evening in China.

Our last morning in Beijing was just a bit of last minute shopping at another market. Then we had to pack up and head out to the airport for the long flight home. I brought some hard boiled eggs and bananas from the hotel. I had a couple cheese packs left and some Larabars. And I had food (including yogurt) waiting for me at home so I knew it was ok to fast a little bit on the way home. We had enough time at the airport for Hong to have a nap, and to buy some Panda Candies (not SCD legal), which turned out to be the most loved thing that we brought home. I hear they taste like a cross between Smarties and M&Ms.

So there you have it, my vacation in China! It was fun, I shopped a lot, and ate a lot of soup. I came home with some knowledge and maybe 2 or 3 new Chinese words memorized. Hong, his Dad, my Mom and my Dad did some traveling without me and took so many nice pictures. Hong has promised to write up a little (actually it might be pretty big!) guest post about the places they visited. If you ever want to visit China and want to see more than just Beijing and Shanghai, check out that post because the sites are just beautiful.