Beijing Food
The food, the food, the food. My parents were a bit overwhelmed by it. I was prepared after having been once before. We end up having epic meals for breakfast, lunch and dinner every single day. The Chinese are very hospitable and every place we went to seemed to have multiple dishes that were special to that region. There was a lot of “You have to try this! It’s special!” but luckily everyone was very understanding of my dietary restrictions. Hong did a great job being stubborn and repeating to everyone (in Chinese) that I can’t have certain things. I wasn’t eating SCD-legal but I tried to stick as close as possible to it. I did have rice but tried not to at every meal. They really do push the congee on me though!

It’s amazing how many things have wheat in them, even in China. Soy sauce is used a lot, many dishes have fried breaded meats, wheat pastry wrappings and questionable sauces. I was definitely exposed to wheat in Beijing but only in tiny amounts. My stomach seemed to do pretty well though. In the mornings we ate at the hotel and it was usually congee, cooked greens, and hard boiled eggs. I would take a couple hard boiled eggs to carry in my purse during the day. I always had a Larabar each day as a mid morning snack as well. Lunches and dinners were quite extensive with many many dishes.

Lamb Hotpot
One of the special meals to have in Beijing is the lamb hotpot. The hotpot almost looks like a volcano with burning embers inside. Around it is a bowl of soup in which you cook meats and vegetables. Normally they add a ‘soup base’ but this time everyone agreed to only add some herbs for flavor. We had ginger, garlic, onion, mushrooms and some other herbs simmering in the pot we cooked in. I read the ingredient list on the package of soup base the restaurant had and it was just awful. I remember it saying a few ingredients in English including MSG, a thickener, “food additives” with numbers, and “etc”. ETC was actually on an ingredient list!  We did not use the soup base and I’m glad for it. This meal for me was completely SCD-legal. The others had dipping sauces with peanut butter and various flavorings. 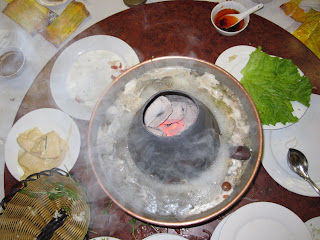 The restaurant raises their own lamb and the chefs come out and slice it in front of you. They slice it very thin so that it cooks quickly. They usually give a few different cuts some with more fat and some more lean. 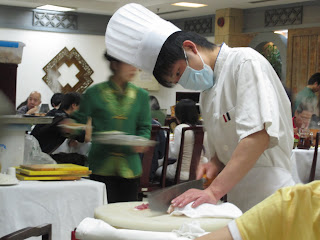 I love hotpot, it’s an easy meal to keep SCD-legal, especially if you have your own broth to use as soup base.

Peking Duck
The other Beijing specialty is the Peking Duck featuring the delicious perfectly prepared crispy skin. We went to a restaurant that specifically serves this dish. Here are the ducks and the chefs roasting them in ovens: 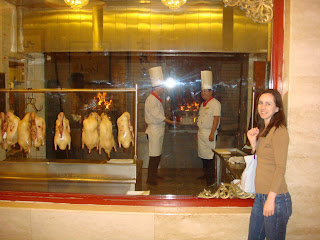 They present you with the certificate showing which duck you ended up getting – we got #331481. The ducks are raised on a farm owned by the restaurant and must be of a certain breed and fed a certain way. 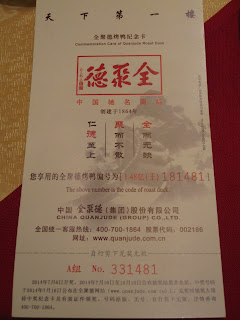 Then they came in with our duck and sliced it up in front of us. First a layer of just skin is sliced and placed on a dish. Then some slices of skin and a bit of meat are placed on another dish. Finally the rest of the meat is sliced up for another dish. 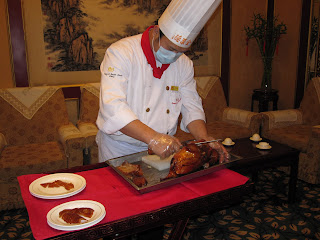 The elements of the Peking Duck main dish: top left the wrapper, top right the duck meat (with skin), little dishes have some sauce, onion, cucumber, sugar and garlic; on the plate is it all wrapped up. The method: take a wrapper and place it on your plate, grab some meat and dip it first in the sauce and then either the sugar or garlic, place the meat on the wrapper and add some strips of onion and/or cucumber. Fold up the wrapper. 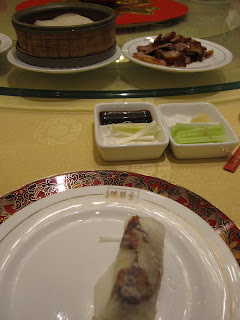 Here’s Hong demonstrating how to eat it..

Wash it all down with delicious watermelon juice (fresh pureed watermelon) 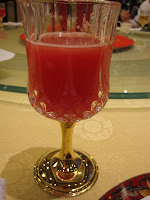 They also serve other duck dishes including the roasted duck heads (halved), duck liver, and duck meat minced with veggies and nuts in a lettuce bowl. I mostly stuck to these dishes since they were more likely to be safe for me to eat. 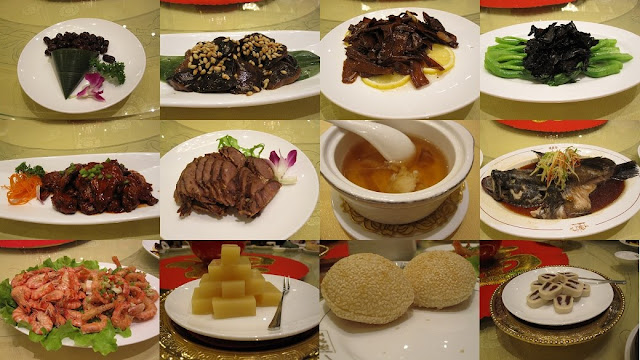 You know it’s all over when they bring out the fruit (the final dessert): 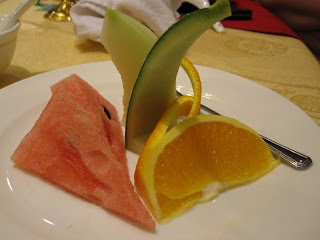