I had gotten some pork back fat from a local farmer and left it in the freezer for a few months. It is good stuff from a pasture-raised heritage breed pig and I keep meaning to render it and try lard for the first time. Fats and organ meats have become the focus of my diet the past few months because they give me energy. I have been putting it off because I always end up getting plenty of beef tallow when I make beef broth, and use that or cultured butter in cooking. I finally decided to render the pork fat after visiting my boyfriend’s (Hong) family for dinner, including his mom, dad and cousin. (Someone remind me to post pictures of them all sometime, they are a great example of a WAPF family).

Hong’s cousin who has been living in China her whole life came to Canada for University about nine months ago. As many young woman are, she is always conscious of her weight and eats healthy. Last weekend at the dinner table, she brought up the topic and said she was staying away from meat for a while to lose weight. She is not overweight at all (she is actually very health, strong but lean, perfect build and size) but had gained 5 pounds since coming to Canada. The problem is that since she came to Canada for some reason she changed what she viewed as being good food. She cut down on meat and started having store-bought bread for breakfast every day. Back in China, breakfast was any of the following: rice wraps with beans, congee (porridge) rice with fish and vegetable, eggs, and fruit. When we pointed it out to her, that the biggest change in her diet was the bread, it was like a light bulb went off. She immediately realized that it was in fact the bread she ate every day. She swore from now on she would go back to the food she knows and trusts.

We have also talked about fats with them and how natural animal fats are actually good for you, especially if the animals are pastured. Back in China, Hong’s mom used to cook with lard or other animal fats but since coming here has mainly used vegetable oil. She still cooks everything traditionally Chinese but the oil seems to be the one ‘new’ thing she insists on using. It used to be canola oil and lately has changed to olive oil, for high-temperature stir-frying. I decided to render the fat I have in the freezer and give it to her for her to use as cooking oil. I’m happy with butter, coconut oil, and tallow I have on hand so I’m glad to find someone to share the other good fats with.

I took the back fat out of the freezer the night before and let it thaw out in the fridge. The next day I got home from work and was feeling lazy so I decided instead of looking up how to make lard that I would just ‘wing it’. My laziness is a bit strange in that I take shortcuts sometimes (i.e.: putting the butternut squash in the slow-cooker because I’m too lazy to cut it) yet other times I will make something extravagant and enjoy every moment of the process. Let me just say this time it didn’t go so well! If you are making lard, don’t be lazy, cut the fat into small cubes. I just cut it into huge chunks and figured oh well it might take a bit longer to render. I put the chunks in a big pot and kept the heat quite low, but hot enough to sizzle and melt the fat. 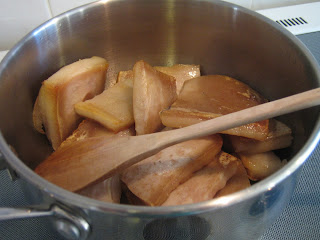 Well 4 hours later.. it looked like I was making some sort of puffed pastries. Each chunk was a solid square mass with a huge bubble in the middle. 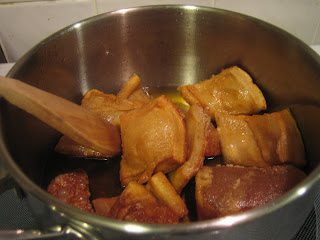 It was getting late so I ended the experiment there even though a lot of fat had yet to render. I did end up with about 1 cup of rendered lard that was deep golden in color. I strained it through a paper towel into a jar and placed it in the fridge. By the next day it had solidified and turned a creamy color (see picture at the top of this post, it actually looks darker in person). Every picture, blog, how-to, and website I see about lard always shows it as almost pure white. So now I’m wondering, is this lard ok to eat? Did I mess it up by cooking too long? Why am I always so lazy when it comes to cutting up food? I’m glad I only used one pack of fat and still have 2 more to try out sometime.

This post is part of the Real Food Wednesday blog carnival hosted by Kelly the Kitchen Kop.